When we talk about the Camino de Santiago, we often think only of the French Way, but there are as many Ways as there are pilgrims.

It is illogical to think that the pilgrims who departed from the lands of the province of Alicante to Santiago de Compostela between the thirteenth and nineteenth centuries marched to Roncesvalles to start their Camino as it is usually done today. The pilgrims started the Camino from the door of their homes and that is what has been intended to happen again by reopening these ancient roads, until today forgotten, in the memory of the people of Alicante. These roads are the Camino del Sureste and the Ruta de la Lana.

The same is true of the routes that have been reopened and marked, as indicated in this triptych. A main Way has been opened, but pilgrims can join it at any point along the Way.

In the towns that have been studied along the Pilgrim’s Way described above, numerous Jacobean vestiges have been found.

There are or have been churches, hermitages and brotherhoods dedicated to the apostle St. James in Alicante, Monforte del Cid and Villena. He was the patron saint of Monforte until the mid-19th century. Festivals with processions were held in his honour in Alicante and Monforte. There were hospitals for pilgrims in Alicante, Monforte, Novelda, Elda, Sax and Villena, as well as in the towns along the Camino del Sureste in Yecla (Murcia) and the Ruta de la Lana in Almansa (Albacete). 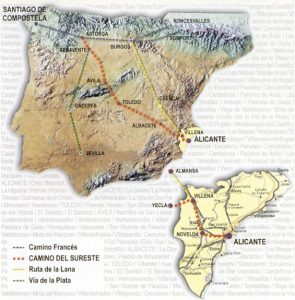 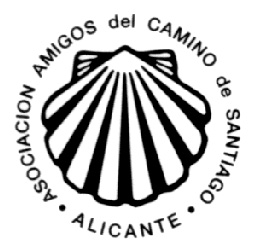 FROM ALICANTE TO NOVELDA

We leave from the parish of Santa María, where km 0 is located. We head towards the cemetery, from where we start to see the yellow arrows.

We continue towards La Alcoraya, crossing a road. We walk a few kilometres along a good track, then a narrow path which, near the Sierra de las Aguilas, widens again. We go up the road to the cave of San Pascual. In addition to the cave where the saint took refuge, we will see a large image of the saint and a cross, a monument dedicated to the Camino de Santiago.

We start the descent towards Orito along the «saint’s path» (senda del Santo), in Orito we pass by the Franciscan convent, where the image of the smallest Virgin in the world can be found.

We head towards Monforte del Cid, passing by the hermitage of the Apparition. After passing under the motorway, we enter Monforte next to the cemetery.

We leave this town by the Old Novelda or El Fondonet road. We enter Novelda crossing the bridge over the Vinalopó river.

FROM NOVELDA TO VILLENA.

We leave Novelda in the direction of the castle and the Sanctuary. At the foot of both we continue along the path parallel to the river Vinalopó, along which the ancient Roman Via Augusta used to pass. After passing under the railway tracks, we cross the river and follow it along the opposite bank until we reach the end of an industrial estate where we cross the river again to enter Elda a little further on.

In the interior of Elda, we will pass next to the hermitage of San Crispín. Cross the river over the bridge at the foot of the castle and follow this road to the top of Portichol. Here we take a path that leads us back to the road. About 300 m after joining the road, take a path on your right that leads to the river. Following the path next to the river, first on the left and after crossing the ford on the right, we reach Sax.

On leaving Sax, just before crossing the river, take the small road first on the left and then on the right towards the Colonia de Santa Eulalia. We pass by the back of the chapel and following the road a little further on we pass over the current course of the Vinalopó river, a little further on we cross the old course. Following good roads, we reach Villena.

From Villena there are two routes to follow, the Camino del Sureste or Camino Alicantino and the Ruta de la Lana.