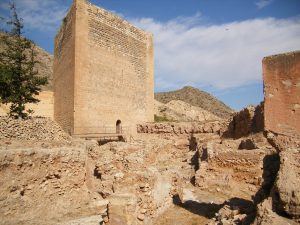 La Mola Castle rises from a small plain 360 m above sea level, 3km northeast from the city of Novelda.

A fortress of Islamic origin, it was built in the late 12th century. It has a polygonal floor shape with eight square cubes overhanging. Today only four remain, two of which are covered up. They feature a square tower inside which today is missing its top, made from adobe on a masonry base.

The existing tower is 11m high by 9m wide, although it is missing a floor; the room below is lit by a barbican. The tower is entered by a half-mesh door at the top.

In the wake of the Christian conquest of the Castle by troops belonging to the Infante Don Alfonso de Castile, the fortress, along with its lands, passed to the Castilian Crown.

With the signing of the Elche Pact in 1305, the Castle and its surrounds passed to the Aragonese Crown, forming part of the Kingdom of Valencia. The fortress was then given to Dona Blanca d’Anjou, Jaime II’s wife, who ordered the reconstruction of its dilapidated walls. A series of reforms were carried out during the 14th century and a magnificent triangular tower built on the castle’s north-eastern side. The tower measures 17m high by 15m wide and nothing has ever been built like it – it is made of masonry, with ashlar reinforcement in the corners. It is reached by a half-mesh door facing northeast located at the top. This door is also made of ashlar. The tower has two floors and inside the lighting comes from the use of a number of barbicans.

In the mid-14th century, the Aragonese king, Pedro the Ceremonious, awarded tenancy of the Castle to the Breton noble Beltrán du Glesquin as payment for his help in battle one year after coming to the Iberian Peninsular with the White Companies. In 1367 it was sold to Hugo de Calviley, who in 1371 sold it to Mateo de Gornay, then Lord of Novelda. Years later it would again pass to the Crown, being given by Pedro IV to his wife Dona Sibila de Fortia.

In 1391, Don Pedro Maza de Lizana, Lord of Mogente and Chinosa, bought La Mola from Dona Violante de Bar, and it became the Barony of Novelda in 1448. La Mola then formed part of this important house of lords until the feudal estates were abolished in the early decades of the 19th century.

In 1931 it was declared an Historical Artistic Monument of National Interest. 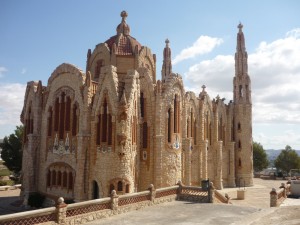 However, the most important attraction for visitors to Novelda is the Saint Mary Magdalene Sanctuary. This religious building was built as part of a project undertaken by Novelda-based engineer, José Sala Sala, who imbued his project with the Catalan Modernist style. Work began in 1918 and was carried out in three phases, finally coming to an end in 1946. The main façade features two 25m-high side towers that end in a stone cross, also found on the cupola and upper arches of the façade. The decorative motifs have their origin in medieval and Baroque styles and in nature itself – influences that led the architect to combine pebbles from the Vinalopó River with polychromatic tiles, bricks, red bricks and masonry work as reflected all over the outside of the building. Inside, the building comprises a rectangular central section with two adjoining side areas. The side-chapel for Saint Mary Magdalene, the Patron-Saint of Novelda, is located at the end, in the apse, and behind the altar we can see a lovely painting attributed to Gastón Castelló. 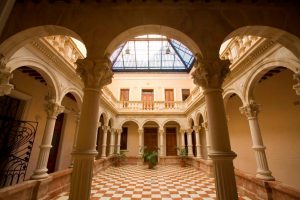 This building, property of the Excmo. City Hall of Novelda, shows the splendor of the modernism of the private houses of this city. This real estate of three floors was built on the last third of the 19th century, which suffered a deep restructuring and enlargement of its plant in 1901, thanks to be acquired by Antonia Navarro Mira who incorporated own architectural and decorative elements of the modernism.

This building was constituted as a family house and was the Gómez-Tortosa Counts’ residence. Although its exterior aspect does not call the antention, because is nearer the architectonical compositions of the 19th century, is its interior the one that does it. It offers good examples of decoration and typical distribution of the bourgeoisie’s houses of the 20th century. It is to point up the columns and cast iron gratings, oval hole stair, skylight, surrounded patio by Corinthian style limestone rock columns on base of red marble of the zone, the tapestries room painted by Lorenzo Pericás surrounded by base of oak tree carved with polychrome tiling, chapel, furniture of that age and other elements that reflect the exquisite modernist flavor of the epoch. 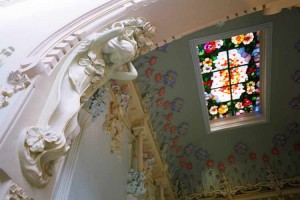 This building was sent to build at the first periode of the 20th century, concretely in 1901, by its owner, Antonia Navarro Mira, to Pedro Cerdán Martínez, architect and author of the project. It is one of the best dwellings conserved in which is found with greater profusion and splendor the exactly modernist decoration. This accomodation, today property of Fundación Caja Mediterráneo, is composed of three floors, emphasizes an excellent work of gratings in windows and balconies, but is in their interior where it’s developed the own elements of the modernism: carved wood, crystals, stuccoes, paintings in ceilings and murals, marbles, epoch furniture, etc, emphasizing the stair, because of its singular beauty and the court with its white marble columns. 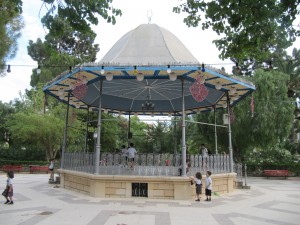 This is a two-storey building with large rooms for holding gatherings and games, magnificently decorated with craftwork including lovely paintings on the ceiling and walls. Construction began in 1888 and the building was later extended. An iron fence set in stone surrounds the 7,000m2 garden, in the centre of which is a pavilion for holding concerts. 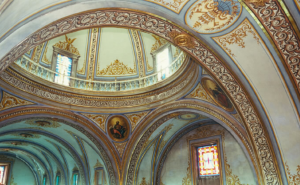 Construction on the church began in 1553 and it has seen a number of important reformations carried out over the years, including in 1740 when the main façade was restored and Baroque features added, and the construction of the Aurora Chapel in 1742. A new belfry was built in 1910. 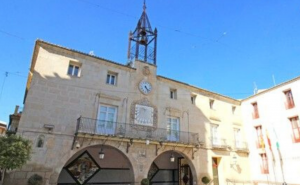 The façade, which dominates the building, is a typical example of 17th century civil architecture in Valencia, being both plain and solid. The double-arched portico was where the market used to be held.

Opposite the Town Hall, in the centre of Plaza de ESpaña, is the statue of Jorge Juan y Santacilia, unveiled in 1913. 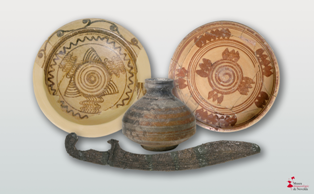 The local Archaeological Museum is located in the second floor of the Casa de Cultura, situated at number 3, Jaume II street.

It is interesting to have a look at the Museum exhibition room, because that lets us know the historical evolution of the population that have lived and settled in Novelda since the Prehistory until nowadays.

The first human communities that occupied the Vinalopó middle valley established in the Prehistory, during the Palaeolithic, time where man lived in the open air, in shelters or caves, being hunting and food collecting their main activity. It was during the Neolithic period, V-IV millennium B.C., when the first agriculture and farming societies settled in the Vinalopó areas were located.

An example of this can be found in the important pottery collection belonging to the Bronze Age, shown in the museum.

Written documents give evidence of the Iberian Culture, land and people afterwards, turned into Roman costumes, as well as archaeological materials found and shown in Novelda.

Finally, we can put an end to our journey throughout the exhibition looking at the ceramic elements, belonging to the modern age of XVII- XIX centuries. The ceramic religious altarpieces complete the collections shown in the museum. 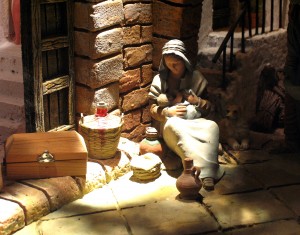 The sacred history is shown through an extraordinary selection of “dioramas”. I all of them it can be appreciated the dedication and the delicate detail, full of tenderness and love, that the makers of Nativity scenes of Novelda have executed, with precision, mastery and generrosity to captivate to whom contemplate them. The Nativity scenes makers Association Museum of Novelda offer, to the person that visits it, a cared Nativity scenes selection works carried out by its members, along its ten years of existence. Monumental works of large dimensions, “dioramas” with the life and passion of Jesus, diverse artistic demostrations of great beauty that utilize the Nativity scenes as a main motive, figures of diverse authors, epochs and nationalities, and an extensive composed photographic exposition with the works rewarded in the contest that the Association organizes yearly for Christmas, they conform this museum dedicated to the Nativity scene that enriches the artistic and cultural patrimony of the city of Novelda.

It is located on the outskirts of Novelda, specifically to the west of the municipality, it can be accessed directly by Av. Alfonso X El Sabio, from inside the village. The park has received a clear Modernist influence that predominates in the streets and buildings of the city. This fact can be clearly seen in the details of the mosaics and trellises that adorn the park. Also noteworthy is the presence inside the park, the Ermita de la Vereda, a religious building dating from the sixteenth century that further enriches the cultural value of this park. It is considered one of the most important green spaces in the city and offers visitors a wide range of leisure and free time possibilities, since it has numerous facilities that allow for various outdoor activities. The Park has an amphitheater where, throughout the year, different performances are carried out.

It also has an area equipped with barbecues for public use, several picnic areas with tables with benches, sports courts for football and basketball, tables for games, playgrounds, etc. In addition to its facilities, the park is highly valued for being a redoubt of nature. Using the paths that run through the park, it is possible to enjoy pleasant environments created by different types of vegetation, which provide, in addition to beauty, interesting environmental conditions for different kinds of animals.