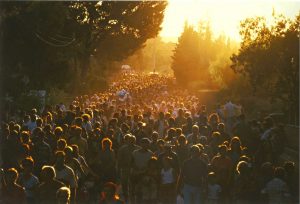 From 19-25 July we hold our celebrations in honour of the patron saint, Mary Magdalene. We have held our pilgrimage, which involves carrying the image from the La Mola Sanctuary to Novelda, every 20 July since 1866. 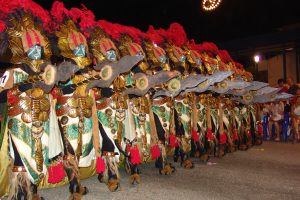 This act was the seed that started this celebration in our town, and together with some people living in Novelda but related to other towns, gave birth to the first local Christians and Moors parade in 1970.

With many efforts and difficulties a group of youngsters started to rehearse the first choreography and Moorish marches in the Casino gardens. The first squadrons developed later on in homogeneous groups formed to represent the first parade, their names were Astures and Negres Betànics, being Christian and Moorish respectively. As a popular decision, the festivities are celebrated as a praise to the patron saint, Saint María Magdalena. Since 1972 there is a general agreement to set the 21st and 23rd of July as the ideal days to celebrate the different parades, as the mentioned days were of a poor activity years ago.

Since that year women participated in the parades as a symbol of a total integration. The same year took place for the first time the festivity speech in such a historic landscape as the Mola castle.

During that year the speakers were imported from other places, as well as the texts, because there was no genuine one. Then, a written festivity speech came up thanks to the local poet Luis Pérez Beltrá, taken from one of his poems called “Torre Triangular”.

We must remark that, whereas in other towns the festivity speech follows the same pattern, the difference in Novelda is the use of original content and autochthonous spatial references. Nowadays the festivity speech is celebrated in the Town Hall the 19th July and is, together with the parades one of the main ceremonies in these celebrations.

The years that followed the beginning of the celebrations, the number of groups involved in it multiplied, having nowadays 8 groups in the Christians and Moors festivities in Novelda: 5 Moorish groups (Negres Betànics, Árabes Beduinos, Árabes Damasquinos, Árabes Omeyas, Piratas), and 3 Christian groups (Astures, Zingaros and Mozárabes)

The 21st July takes place the parade with the Christian entry, and the 23rd the Moorish entry. Morover, it is noticeable the participation in the different parades of the group Negres Betànics, because unlike other towns, this group marches in rows or special groups, being considered in this town as another group.

Due to its youth, 38 years old, this celebration takes a high place inside the Christians and Moors festivities, so popular in our town. The population involved in this festivity counts with more than two thousand people, even the three generations of a whole family participate in the celebration. Therefore, year after year the participation increases and the common consciousness of the festivity as a cultural heritage is awake. 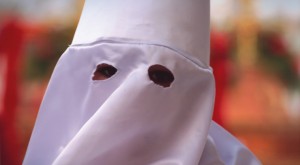 Our Holy Week organizes itself as we know her now in 1880, in the course of time it has been growing and includes the whole series of projects, both cultural and social out of the dates that him are proper.

At present, processions are celebrated from the Palm Sunday up to that of Resurrection.

We can emphasize the Procession of the Holy Burial, in the evening of the Holy Friday, where procesionan the totality of 14 brotherhoods that compose at present the Biggest Meeting with a participation that patrols 2500 brothers. The Procession of the Easter Sunday that closes the processional parades, passes to the traditional “ día de la Mona ” on Monday of Easter. 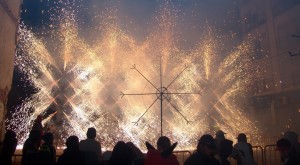 Carnavales is a feast day that has become increasingly popular in Novelda. A number of colourful and entertaining street parades have been organised over the past few years. The most typical event of the day is the afternoon tea featuring coca de manteca as a prelude to the arrival of Lent.

An historic procession called ‘Forty Hours’ is held in Novelda on the Tuesday of Carnaval. The procession is unique in Spain. It began following an epidemic that ravaged the city. Dated in Rome on 28 February, 1897 by Pope Leo XIII, it has been celebrated every year since. If the procession were not to be held any year, the privilege would be withdrawn – hence this religious manifestation has gone ahead during rain and despite having the procession path cut. 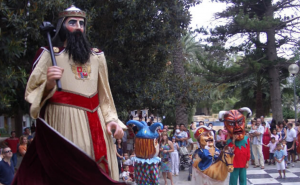 All the districts celebrate feast days in honour of their patron saints with processions, open-air celebrations, street parades, etc. during the months between May and September.